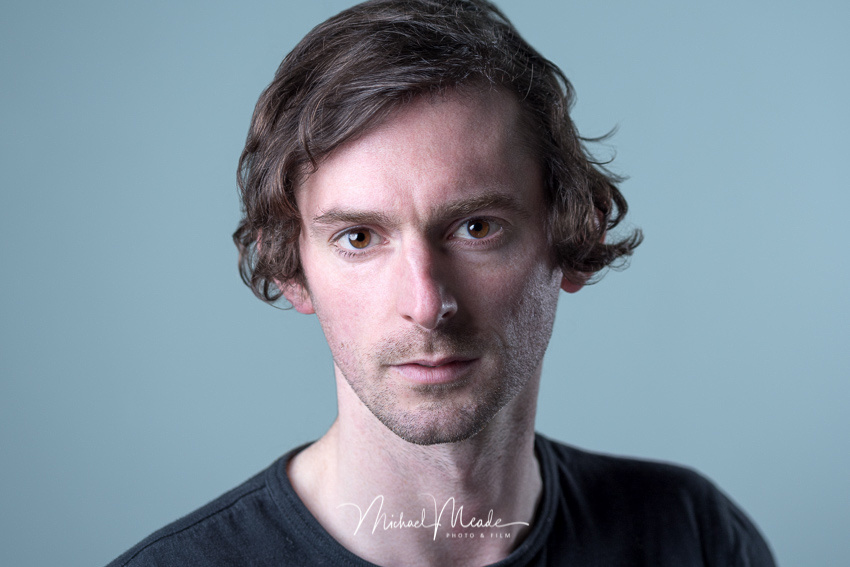 I first met Tim Creed while on family summer holidays when I was about 14 years old in Ventry, county Kerry. Myself, along with my older brothers and Tim managed to infiltrate an Irish summer college ceili. We danced the night away leis na gcailíní until we were spotted by the ceannaire and shown the exit door, 'amach libh! Since those days, we have met from time to time over the years.

Tim is fast becoming a successful Irish actor appearing on many films and shows on television. He is developing a long list of achievements on his acting cv.
We recently happened to meet by chance near the same spot we first met, this time in Ballyferriter. I mentioned to him about working on his headshot as it's an area of photography I haven't had a lot of experience in. I have done headshots for people but not with actors. Tim was very obliging about the idea.
We met up at his house and after fine tuning the lighting and camera settings we went about getting to this final image.

It was a very interesting experience for me to learn from Tim how to best try and capture the essence of a person in one single picture. Casting agents can scan through a catalog of actors headshots when filling parts. Your headshot gives you one split second the capture their eye and jump off the page. This means that it's not just a case of standing in front of the camera and taking the shot. Subtle posing, exposure, lighting along with that glint in the eye all can lead to a successful headshot.

Having music playing the actor likes, having a chat over a cup of tea and getting to know each other before ever taking a photograph will all lead to the actor feeling comfortable in front of the lens and with a stranger trying the expose their vulnerabilities in front of a camera.

The whole process can last up to three hours to try get that one split second moment in time.

If you would like to know more about Tim and his work check out the following page:
http://www.lisarichards.ie/actorsm/tim-creed#.WWqH1sYZNEI

I'm looking forward to working with more actors in the future!