I attended a three day guitar workshop that Steve Cooney gave in Ballyferriter during the Scoil Cheoil an Earraigh music festival in February earlier in the year. It was a an amazing three days listening to him speak about life, music, the guitar and to hear him play some beautiful airs. I have been an admirer of Steve Cooney's playing for many years so to spend this time with him was very special. He enlightened me more to my approach to the guitar, music and accompanying music rather than learning particular chords or tunings.

From the first day I really wanted to take his portrait. When I was meant to be focusing on what we were doing with the guitar, I found myself looking around the room for the best place for a portrait. I watched the movement of the sun for the first two days and saw where it was shining in the room at different times during the days. After the second day I plucked up the courage to ask him if he would mind me taking his photograph the following day. I was delighted when he kindly obliged me the opportunity.

When the moment came, I only had about 20 seconds to capture it. I knew exactly what background I wanted, a plain wall in a bit of shadow. I was lucky that it was cloudy so the suns light was diffused coming in through the window to act as a key light for the side of his face. I had my settings dialled in after a quick test shot on a chair. I wanted a shallow depth of field with focus on his eyes so I choose and aperture of f/3,5. "One shot, do not miss your chance to blow. This opportunity comes once in a lifetime".

I was very happy with the result!

This is my version of this piece of music he taught us to play. 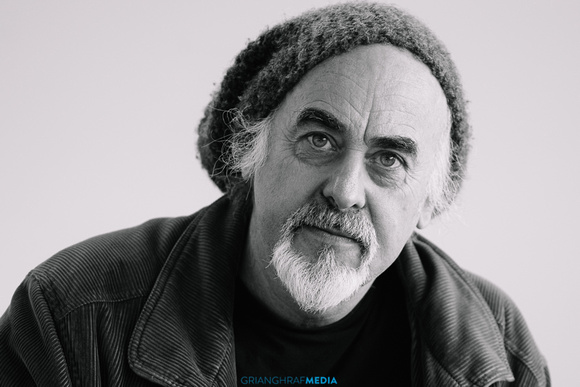